With a market of more than one billion people in China, self-test is extensive and convenient. If the simultaneous screening of antigens and nucleic acids is increased in China, the capacity of this market is self-evident. But at the same time, many challenges will also be encountered, such as the raw materials required for the new crown antigen detection reagent. The price of raw materials, delivery cycle, quality, etc. are all enterprises must evaluate. Here we mainly analyze the situation of preservatives, one of the raw materials of the new crown self-test antigen reagent.

1. Sodium azide*: used to be one of the preservatives commonly used in in vitro diagnostic reagents, it can inhibit the growth of bacteria, soluble in water and liquid ammonia, insoluble in ether, slightly soluble in ethanol, the dosage is generally 0.1%~0.5%. In most cases, it is effective, but because it contains amino groups, it will interfere with various enzymes such as horseradish peroxidase (HRP), superoxide dismutase, and catalase, so it is generally not recommended to use reagents containing HRP. For the same reason, it is generally not used for specimen preservation in antibody and enzyme immunoassay experiments. In addition, it blocks the electron transport chain of cells and is toxic to many organisms, so it is not suitable for in vivo experiments. At the same time, sodium azide* is similar to cyanide, and is a highly toxic compound with a median lethal dose of 27 mg/kg (rat, oral), which has inhibitory effects on cytochrome oxidase and other enzymes, and it can hinder the formation of oxygenated hemoglobin in the body, and has a significant antihypertensive effect. Acute poisoning occurs dizziness, headache, general weakness, drop in blood pressure, bradycardia and coma. In addition to being irritating to the eyes and skin, it can also cause poisoning and death through inhalation, oral administration or skin absorption, and it can explode violently in case of high fever or severe vibration, so you should pay great attention to safety when using it. Due to safety concerns, the use of sodium azide is increasingly limited. In daily use, you will encounter various restrictions such as purchase, transportation, storage, and use.

Ⅱ. The problems encountered when using these two preservatives:

1. Sodium azide* is a restricted and regulated product. If there is no record purchase, the risk of being found out when using it is too great, and it is even more difficult to purchase in large quantities. In addition, if the filing is successful, the cost of time and energy is also very high, plus various rules and regulations in purchase, transportation, storage, and use, it is a very unfavorable condition for rapid mass production.

2. PC-300 using imported Sigma ProClin300 will encounter problems of price and delivery time. On March 11, 2022, we checked their prices and delivery time on Sigma's official website. You can refer to the picture below. The period is really long and the cost is relatively high. For COVID-19 nucleic acid detection reagents and virus storage tubes, everyone must still remember that from the high price on the market to the continuous price cuts at the end, Guangdong first launched the new crown antigen self-test price of 31.8 yuan on March 11, but the cost competition of various manufacturers later will speak for itself. 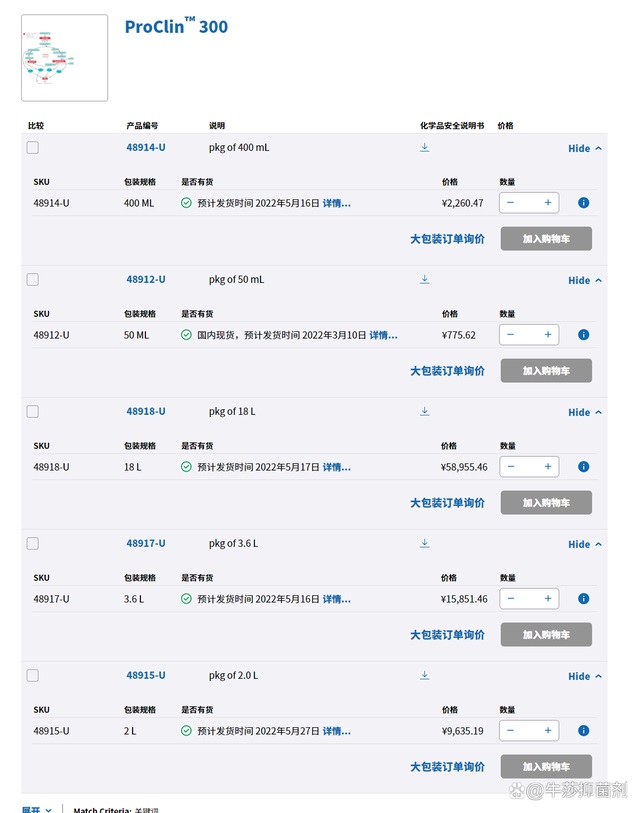 1. Other preservatives can be used instead of sodium azide*. You can refer to the following specific plan to avoid various restrictions in the purchase, transportation, storage, and use of sodium azide* once and for all.

2. In general, Sigma Proclin300 or Niusa PC-300 can be used, because PC-300 itself is a dual antibacterial system containing CMIT and MIT. In theory, its antibacterial ability is better than other several preservatives. At the same time CMIT takes into account the quick killing effect, which can effectively reduce the initial bacterial load. 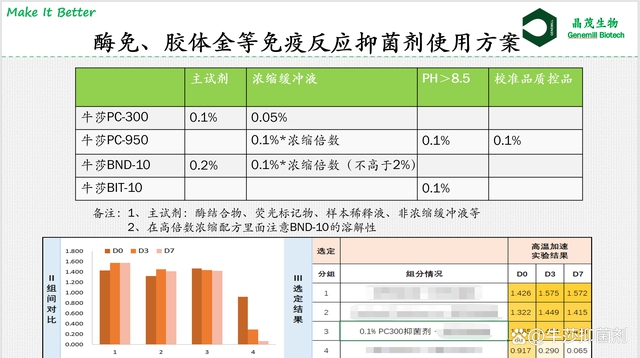 Recommended use of self-test antigen preservatives

The new crown antigen self-test is currently a very good opportunity and challenge. The cost control of raw materials and the delivery time of raw materials will become the focus of competition among manufacturers. As far as preservatives are concerned, there is nothing wrong with using imported ones such as Sigma ProClin300, but the price and delivery time must also be considered. You can choose some domestic preservatives as a backup for verification, so that you will not be caught off guard if you are prepared.